As the Earth travels through space in its orbit around the sun the pieces of solid matter which lie in its path are cought in the Earth's gravitational field and begin to fall through the atmosphere to the ground.

Mbozi meteorite is the World's eighth largest meteorite located about 65km southwest of Mbeya, with around 3m long and 1m tall.

Mbozi meteorite is the most popular tourist attraction found in Songwe region. Weighing in at a cool 12 tons, the irregularly shaped Mbozi Meteorite which lies on the southwestern slope of Marengi Hill, 70 kilometers west of Mbeya, off the road to Tunduma is the world's eighth largest known.

The meteorite is a fragment of interplanetary matter that was large enough to avoid being completely burned up when entering earth's atmosphere.

But the fragment is small enough to avoid exploding; of the estimated five hundred meteorites that fall to earth each year, only thirty percent strike land, and less than ten are reported and recorded.

The Mbozi Meteorite has been known for centuries by locals, who call it Kimwondo, but the absence of legends recounting its sudden and undoubtedly fiery arrival indicate that it fell to earth long before the present inhabitants arrived, a thousand years ago. The meteorite was officially discovered in 1930 at the time when only the top was visible.

To reveal the whole meteorite, the hillside around it was dug away, leaving a pillar of soil under the meteorite, which was then reinforced with concrete to serve as a plinth. The irregular notches on the pointed end were caused by souvenir hunters hacking out chunks no easy task given the strength of the nickel-iron of which it's made.

Most meteorites consist of silicates or stony-irons, so Mbozi meteorite is uncommon in that it's composed mainly of iron (90.45 percent) and nickel (8.69 percent), with negligible amounts of copper, sulphur and phosphorus. 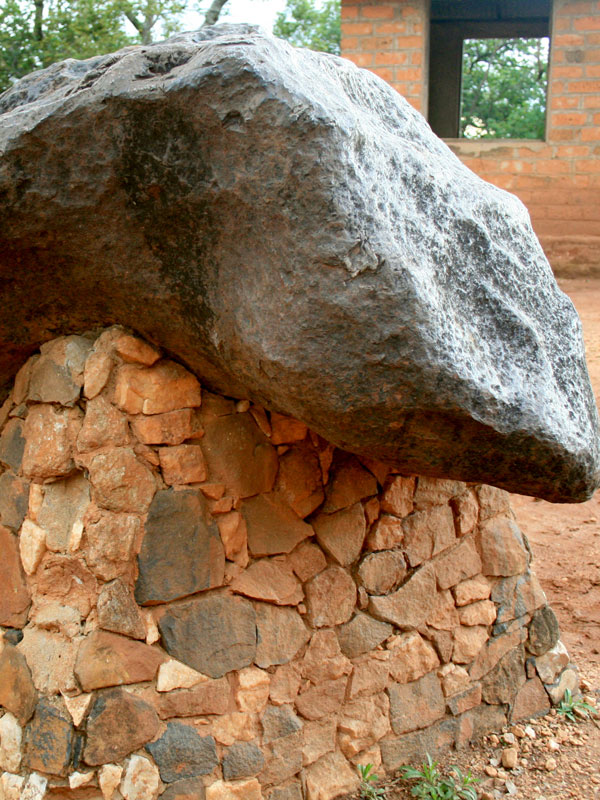