The Amboni Caves are the most extensive limestone caves in East Africa. They are located 8 km north of Tanga City in Tanzania off the Tanga-Mombasa road. The caves were formed about 150 million years ago during the Jurassic age. It covers an area of 234 km. According to researchers the area was under water some 20 million years ago. There are altogether ten caves but only one is used for guided tours.

Amboni Limited, a company which was then operating sisal plantations in Tanga Region acquired the area in 1892. The company notified the British colonial government about the caves who in turn declared the caves a conservation area in 1922.

It is not known when the caves were exactly discovered but reports indicate that ethnic groups such as the Segeju, Sambaa, Bondei and Digo who lived near the caves used it for prayers. In 1963, the then government of Tanganyika handed over the caves to the Department of Antiquities.

These caves have been subject of local legends and a number of mythical and awe-inspiring stories have been attributed to the caves. To the local people the caves are regarded as supernatural formations where supernatural powers commonly known as Mizimu; are believed to have been residing since the caves formation. There are chambers treated as sacred chambers for worshiping some spirits. One of them is called Mzimu wa Mabuvu. Some believe that there is a powerful deity which can alleviate their sickness, sufferings or increase their fertility.

These limestone caves are formed by a special nature of erosion. According to Mturi (1975:18-19), there are tree theories which explain the formation of the Amboni Caves. The first theory is known as the vedose process. According to this theory, rain water absorbs carbon dioxide in the atmosphere and forms a weak carbonic acid which is capable of dissolving calcium carbonate minerals of which limestone is formed. When this acidulated rain water seeps through the limestone it is dissolved and cavities and caves are formed.

The second theory is that of phreatic origin. According to this theory, the caves are formed by erosion from the sub water table. The rain water with carbonic acid rapidly seeps through the limestone and reaches the water table before being a saturated solution of calcium bicarbonate. At this stage it is still capable of acting as a dissolving agent for the calcium carbonate.

The Amboni caves are believed to be the most extensive limestone caves in East Africa, located in Kiomoni village. The caves, a one and half kilometer stretch, are a fascinating historical site, which were used as hiding places for the locals. The Amboni caves are among the area's most popular attractions that have attracted, over the years, hundred thousands of tourists both local and foreign. The caves are very dark inside and potentially lethal. Nearly all tunnels or chambers are accessible to tourists via a guided tour. 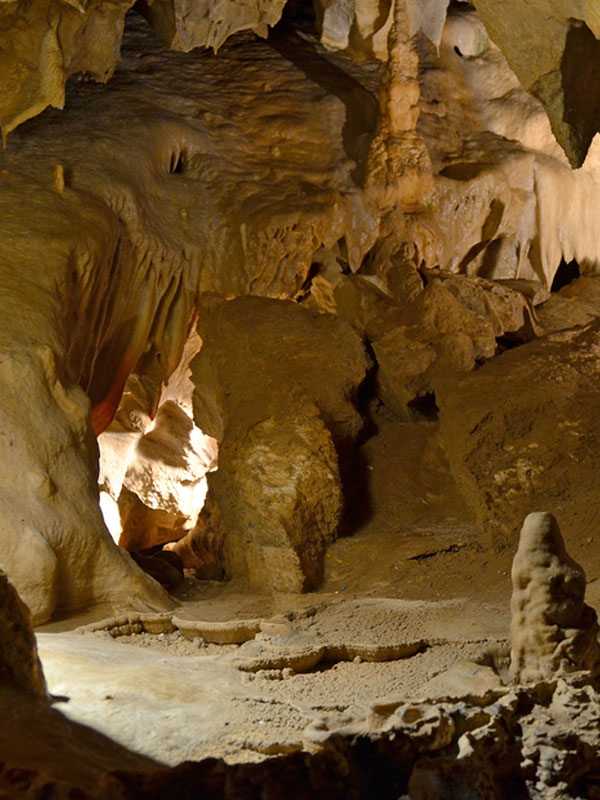